The Ultimate Summer Camp Jeep came together quicker than you might imagine, as can be seen in the current coverage of our annual weeklong on/off-road-trip. Every year we build a vehicle as the official vehicle of UA, and this year we constructed a scratch-built Jeep with a variety of new and recycled parts. Two and a half months is an incredibly short time to build a 4×4 that has to work off-road and run down the highway at speed, but the crew at Synergy Manufacturing pulled it off. There is a 550hp supercharged V-8 under the hood, a four-speed automatic with a Magnum 205 transfer case for plenty of gearing, and race-prepped Spidertrax axles that spin 38-inch Falken tires under a custom flexy suspension. The Jeep is a mixture of the latest technology under an old-school body, and that was because of the story behind the Jeep.

The goal was a Jeep that never really existed but could have. We imagined an old prototype military Jeep with a longer-than-standard flatfender wheelbase and a taller cowl. We actually developed a whole story about how this Jeep was made for military testing where more cargo was needed and a rare supercharged four-cylinder was being developed for high-speed desert recon. When the program was canceled the Jeep was scrapped, but saved from the crusher by a crazy old guy who worked as a camp counselor. From there we pictured it ending up at various summer camps where it was used as a maintenance Jeep for years, hauling stuff around for the upkeep of the camps and basically working in the woods for the enjoyment of the campers. Because of this, the Jeep was painted various colors over the years, but the inside still carried the olive drab paint. When those stock old Army seats wore out in the 1970s, a pair of plaid VW bus seats found its way in the Jeep. Eventually the old codger died and the Jeep was parked in an apple orchard to rot. And then we found it and rescued it and made it into our Ultimate Summer Camp Jeep. All we had to do is build up the body some, add a new set of plaid seats, and swap in all our favorite drivetrain parts.

Of course, all of this "history" is constructed just like our Jeep—from scratch—but that explains the look and feel of the Ultimate Summer Camp Jeep and why it looks like no Jeep ever made. 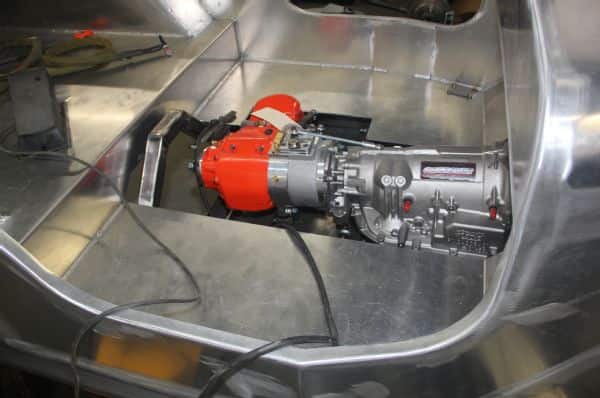 The Ultimate Summer Camp Jeep (USCJ) has an aluminum tub made by Aqualu that started out as a CJ3B body but was stretched to accommodate a 108- to 109-inch wheelbase. The floor of the tub was left open to clear the Gearstar 4L80 transmission and Magnum 205 transfer case with a reduction box from Offroad Design. We eventually built a removable tunnel cover for the floor to allow easy access for any repairs. 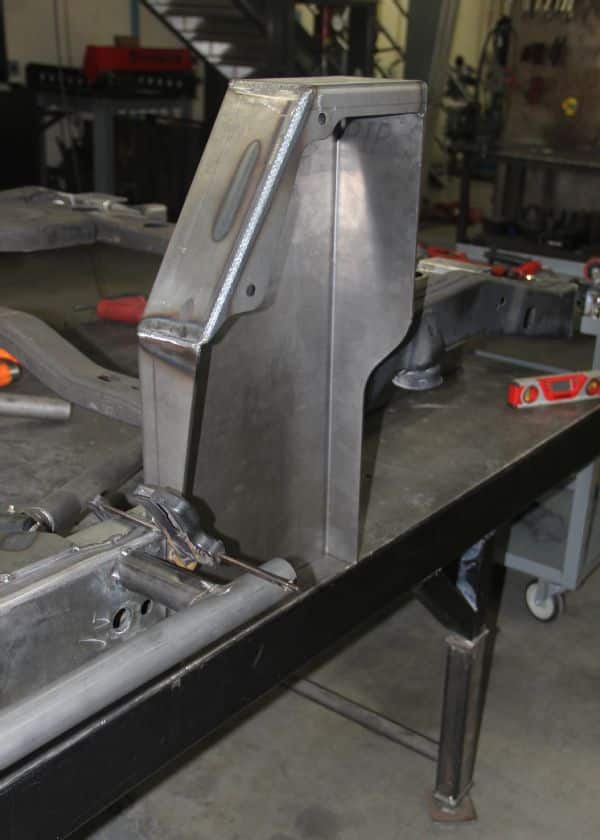 The rear suspension of the USCJ uses coilover shocks that attached to towers high up inside the rear wheelwell. The frame was cut out so the towers could be recessed into the framerails to keep the shocks tight inside the body. 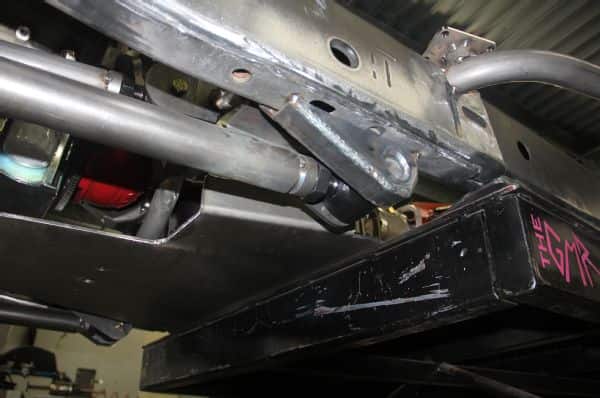 The front suspension link mounts are boxed for strength, and the mounting bolts are protected within. The mounts hang below the frame, but the link will act as a ramp so they won’t hang up the Jeep going forward. And we’re hoping 38-inch Falkens and 550 hp will keep us from going backward! 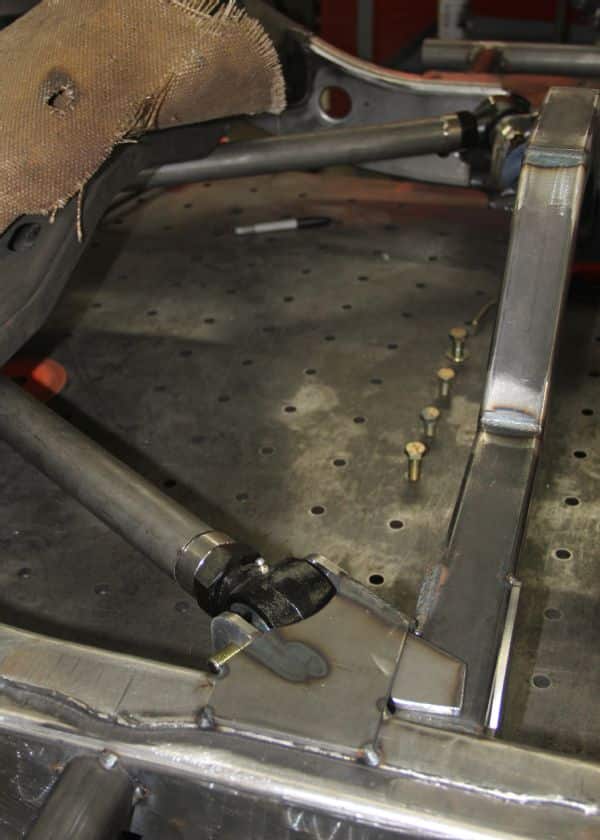 The rear upper suspension links hit the frame just shy of the rear of the transfer case. We added a crossmember made of square tube that will clear the rear driveshaft. The link mounts tie into the corner of the crossmember and the frame for strength. We are using BDS Suspension flex joints on the majority of the suspension links. 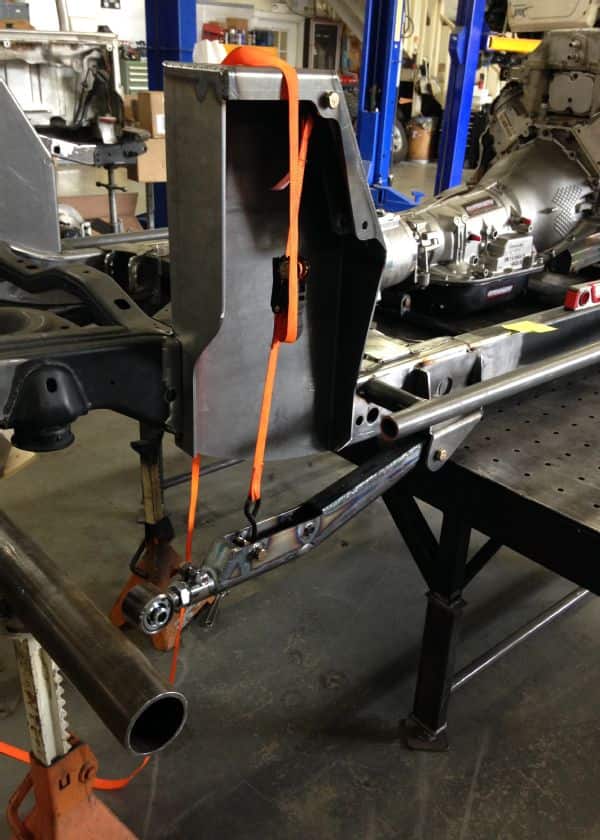 The rear lower links are a trailing arm design. The uppers are triangulated to locate the axle side-to-side. The lowers have the rear shock mounts integrated into the links, so they are not attached to the axle itself. The links will have both coilover shocks and bypass shocks. The bypass shocks allow different shock resistance depending on the axle location, they can get very aggressive as the axle nears full compression to settle down the axle without a hard bump—but more on that later. 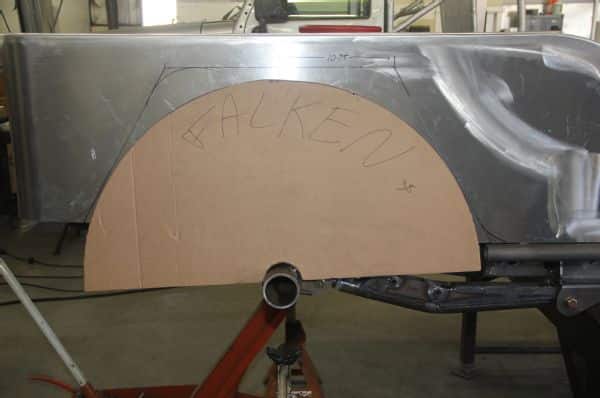 The rear Falkens are a little flat! Actually, this is the template to show us how high up a 38-inch mud tire will be when the suspension is fully compressed. 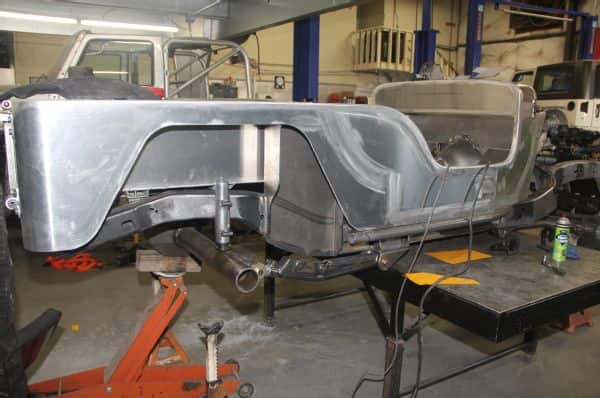 The idea behind our USCJ came from the 1940s military prototype MLW2 (Military Long Wheelbase version 2), so when we needed to cut out the rear wheel opening of the Aqulalu tube we mimicked that old veteran. Many Jeepers will think we went with a Wrangler-style opening, but not so. It’s a much older historical precedent. 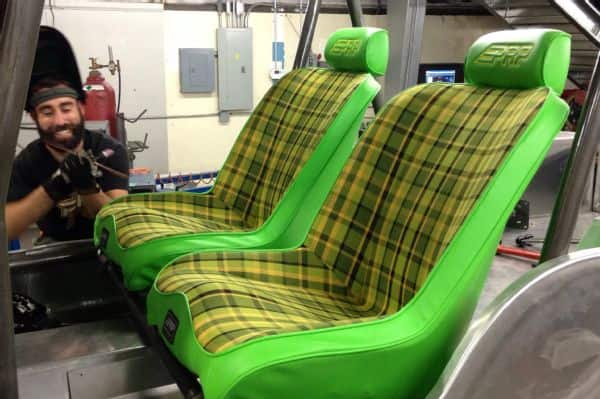 About this time our seats showed up from PRP. These are extra-wide suspension seats but with custom plaid fabric. We got the fabric from a Volkswagen van restoration shop known as GoWesty. The fabric isn’t for everyone. We got lots of complaints on social media complaints about the crazy color, but we think it’s so different it’s cool. Or maybe we’re just crazy ourselves. 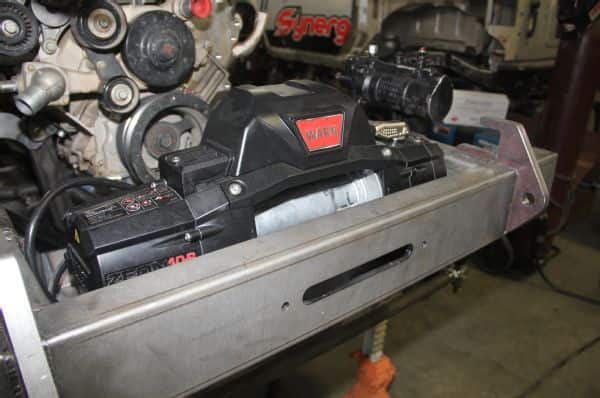 A flatfender doesn’t need much in the way of a bumper. The grille is pretty narrow, and the tires need access to the rocks they want to crawl over. So Synergy fabricated a super-simple bumper to house our Warn Zeon winch. We know flatfenders always have the iconic Warn 8274 winch, but we wanted as little obstruction as possible to keep airflow coming for the supercharged V-8’s cooling system. Note our ingenious towhooks with shackle points for recovery purposes. 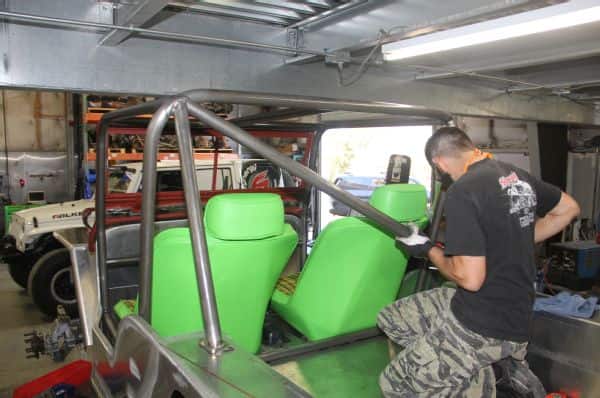 With new seats in hand, Synergy started fabricating our rollcage. The cage is just enough to cover driver and passenger—no seatback tubes, no back-of-tub kickers. Just the bare minimum, yet with plenty of protection for the crew. 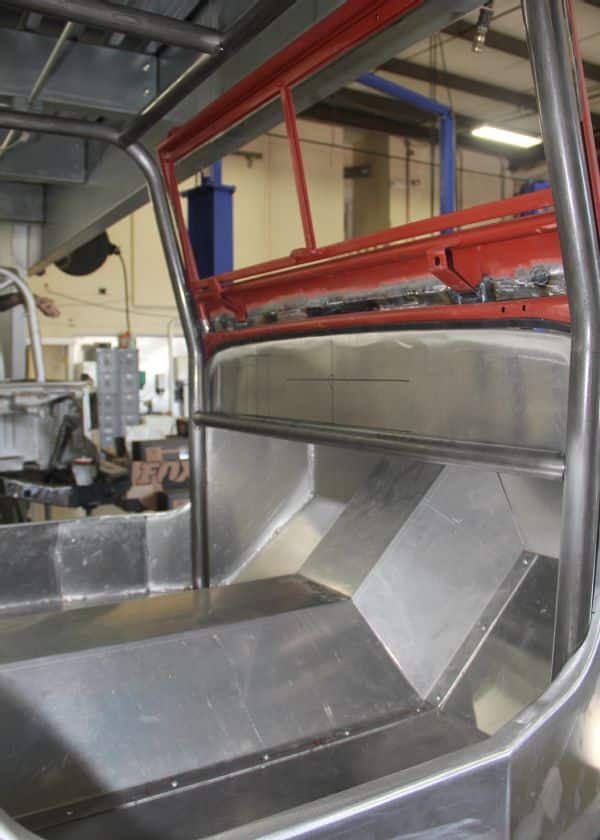 To keep the overall height to a minimum, we trimmed the Omix ADA replacement MB windshield frame as well. To keep the cage tight and clean, we also had to remove all the window sliders that allow the windshield to flip out. The cage is built of 1 3/4-inch chromoly DOM tubing and is fully TIG-welded. Eastwood is the official welder of the UA. Note that the front cross tube runs just along the bottom of the dash.

The cage was moved in fully welded, and then we added a tilt steering column mount, which means the cage is now not removable from the tub. The tub can still be removed from the frame so it can be repaired if need be. The front cross tube for the seats is made of parts that are bolted together in order to access and remove the center hump panel. 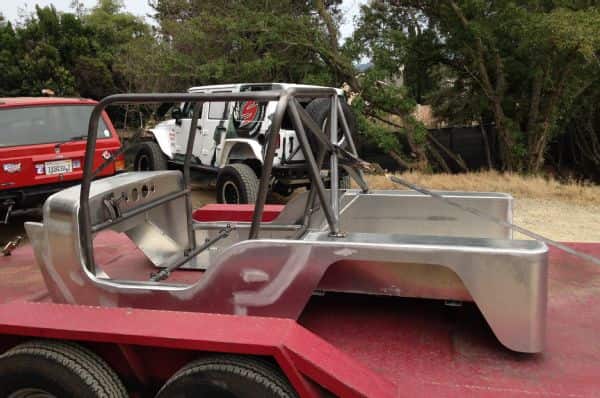 We pulled the body off the frame and threw it on the trailer so it could go to paint, but there is still more work to show. Stay tuned for the next installment. Also, on November 10 you can watch the whole buildup on Dirt Every Day, presented by 4-Wheel Parts, on YouTube.