You could win this over-the-top Gasser! 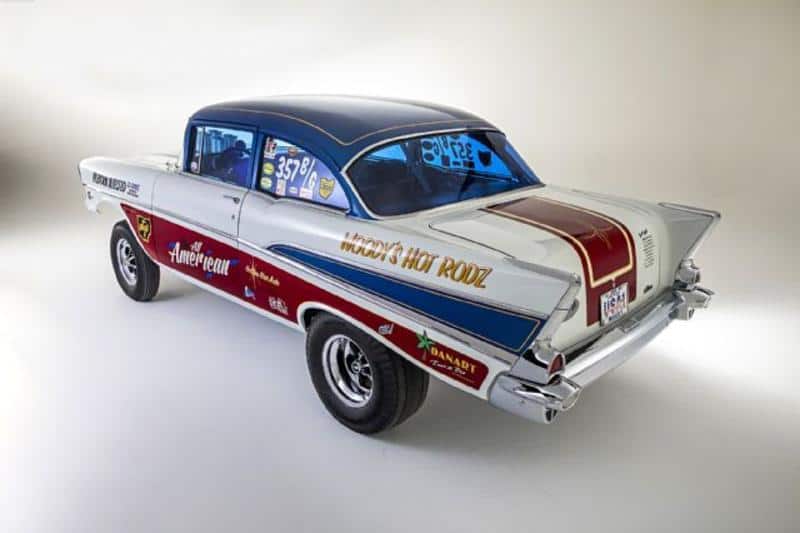 In It To Win It: This almost-new ’57 gasser built by Woody’s Hot Rodz could be all yours!< 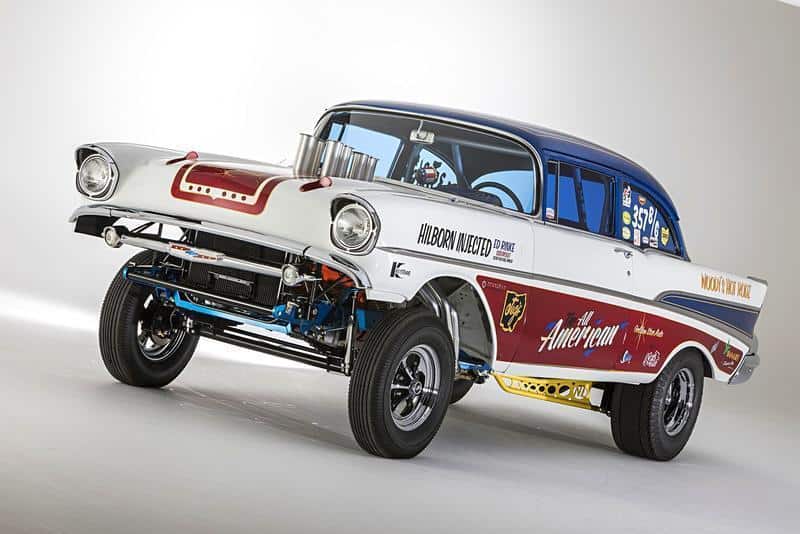 Automotive enthusiasts are a special breed. For many of us, the hook was set early in life by an experience of some sort. For some, it was a ride in the passenger seat of a favorite uncle’s ’69 Camaro, and for others it was simpler. In the case of Christopher Sondles, the hook was set long before he could legally operate a vehicle.

“I have always wanted to build an over-the-top ’57 gasser. It goes back to building model kits in my parents’ basement as a kid, I guess,” says Sondles. The 44-year-old owner of Woody’s Hot Rodz in Bright, Indiana—one of the world’s largest purveyors of Tri-Five Chevrolet parts and vehicles—is one of those enthusiasts who is in a position to bring his obsessions to life, and he’s never done so quite as dramatically as he has with The All American, the ’57 gasser seen here.

Not only has he brought his vision to life in three dimensions, one lucky Tri-Five fanatic will get to own it. You read that correctly—this car is the 2017 Golden Star Auto Parts giveaway car that will be deposited into the hands of one lucky participant of the Danchuk Tri-Five Nationals, which coincidentally—or maybe not—is presented by none other than Woody’s Hot Rodz. The Tri-Five Nationals are held over the weekend of August 11-12, 2017, at the one-and-only Beech Bend Raceway in Bowling Green, Kentucky. There are two simple stipulations to win this car: the winner must be registered for the event and must be present at 6 p.m. on August 12. That’s it. Cost of entry is a measly $65, and you may just walk away with the opportunity to figure out how to get this car home from Kentucky.

And now, back to your regularly scheduled story, which will fill you in on the rest of the details behind this beautiful car. 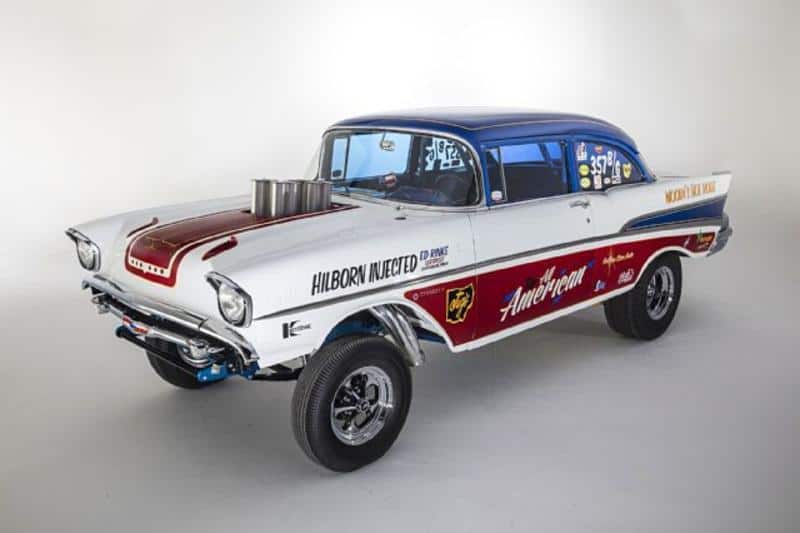 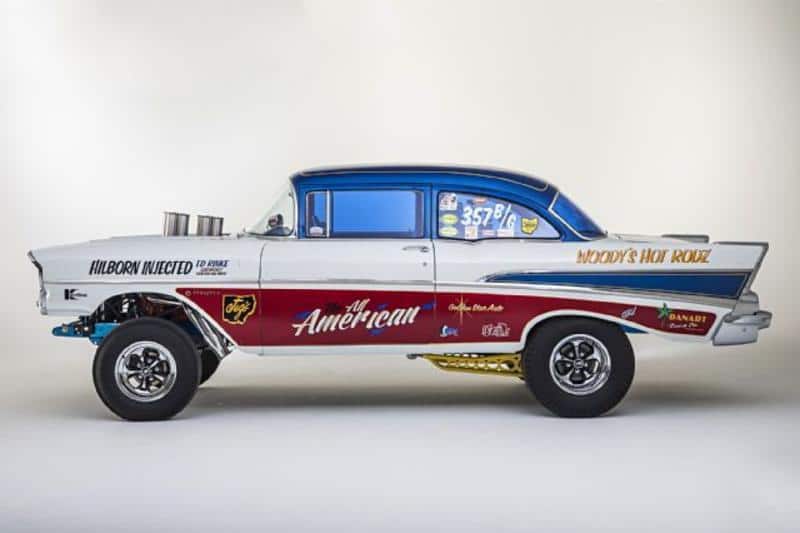 As 2015 was the 60th anniversary of the iconic ’55 Chevy, Woody’s put together a car to use as a giveaway at the Tri-Five Nats, then in 2016 they gave away a ’56 model, and this year that program continues with the presentation of The All American at the event.

“A lot of what we do as builders is build fullsized model kits,” says Sondles.

“It is amazing how not much has changed there for me over the past 40 years. I was born in 1972 and some of the earliest memories for me were of the bicentennial celebration of 1976. One model that I built over and over again as a kid in many different iterations was the MPC Spirit of ’57. It was a tilt front-end, two door sedan.” 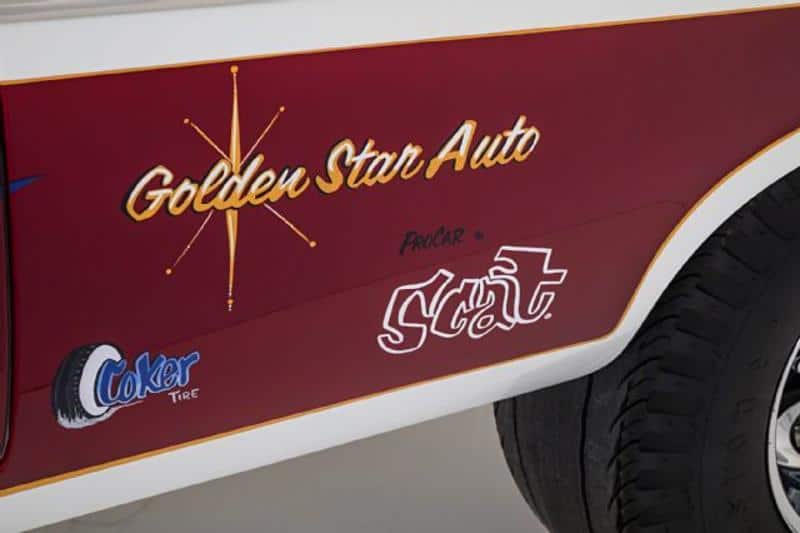 It was with the Spirit of ’57 that the vision of The All American began to take shape as the giveaway car for the 2017 edition of the Tri-Five Nationals.

“With everything going on in politics and some of the negativity surrounding what it means to be American, I thought perhaps we could make a few people proud of being American by seeing a red, white, and blue tribute to the iconic ’57 Chevy cruising at shows across the country. And it has worked. The T-shirts that feature the car have been some of the best-selling shirts we have ever had at Woody’s. People love the car! Someone’s going to have a one in about 2,500 chance to win this car,” says Sondles. Way better odds than Vegas or the lottery!

The car’s fiberglass tilt front-end is the crown jewel of the car. Given to Sondles by a friend, the piece dates back to the ’60s and is the only used piece on the car. The complete, all-new body is straight from the stocking shelf at Woody’s, built in-house using Golden Star body panels. From the firewall back, the Golden Star panels were hand-crafted together, by Jerry Taylor; this makes the entire body new with the exception of the dash and pedal assembly. 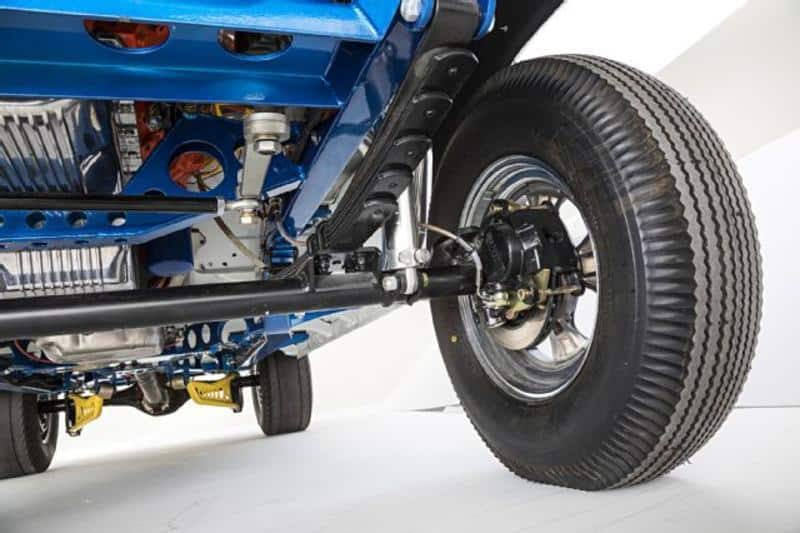 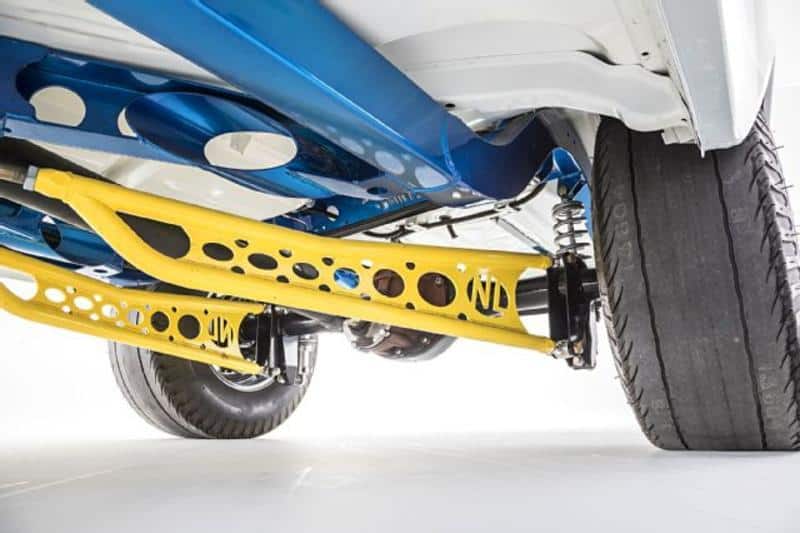 “New steel bodies are the way to go. There is no fixing, just building. We built the whole car from start to finish in about six weeks. When you start with brand-new, you don’t have to repair a bunch of stuff,” says Sondles.

The body sits atop the Badder Asser Gasser (BAG) chassis manufactured by No Limit Engineering and available exclusively through Woody’s and Danchuk. It features a Speedway front axle, double-adjustable Viking shocks (coilover in the rear), a 48-inch ladder bar suspension that utilized a Panhard bar for lateral locating purposes and a built-in driveshaft loop for protection at the track. The car is equipped with a front-steer Chevy Vega steering box to provide better oil pan and header clearance in the engine bay. To provide durability, the chassis was sent to Creative Finishing in Batesville, Indiana, for powdercoating.

Serious thought was put into the driveline selection, with the Woody’s team eventually choosing a 502-cubic-inch big-block engine from Ed Rinke Performance in Michigan. In true gasser fashion, the engine is topped with an Individual Runner intake manifold system from Hilborn, although this set is controlled by one of Holley’s EFI systems. A fuel system from Weldon sucks gasoline from a JEGS fuel cell. 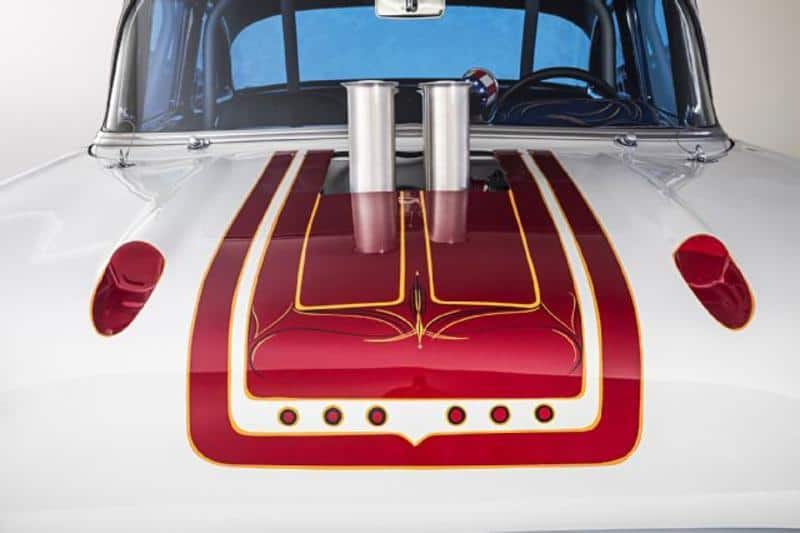 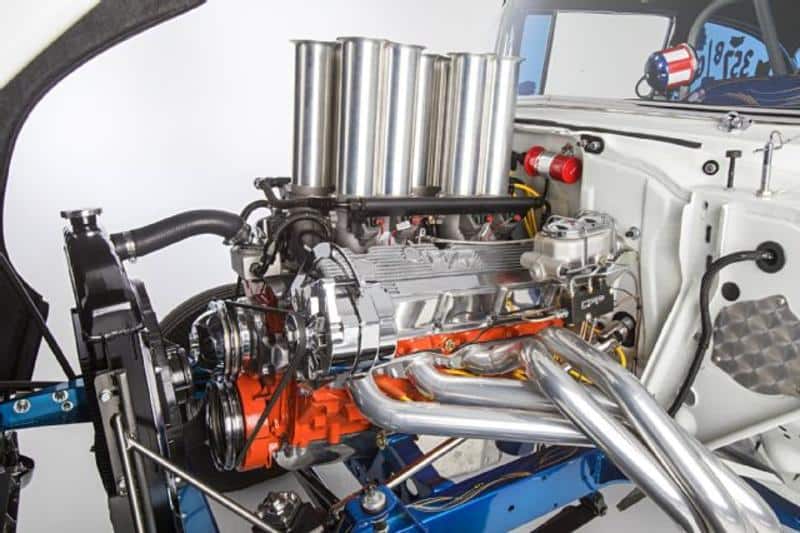 “Even though it looks like 1968 gasser cool, it’s very drivable thanks to fuel injection. The 502 creates stupid amounts of horsepower and torque,” says Sondles.

Exhaust runs through a set of Doug’s fenderwell headers, while the power is routed into the 2,800-stall torque converter, then through the Level 4 GM 4L80E transmission prepared by GearStar Transmissions. The Cincinnati Driveline driveshaft spins an Eaton TrueTrac inside a 4.56:1 ring-and-pinion, all stuffed inside a 9-inch Ford rearend housing built by John’s Industries. 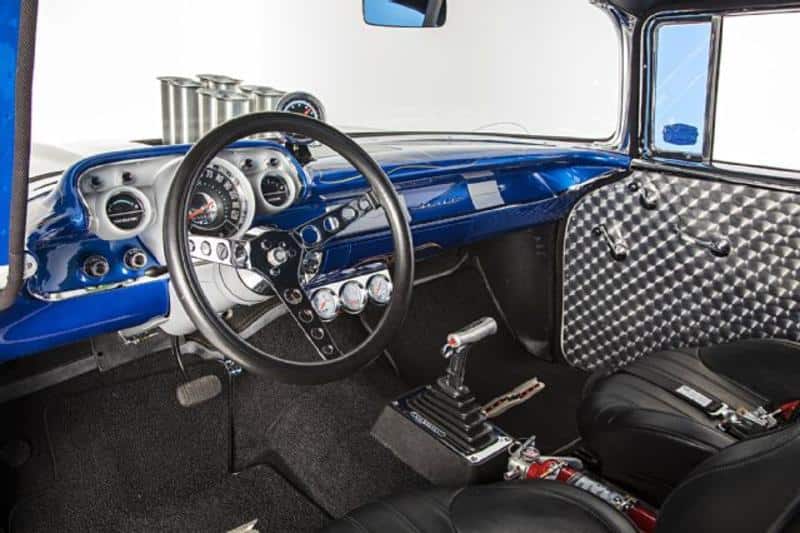 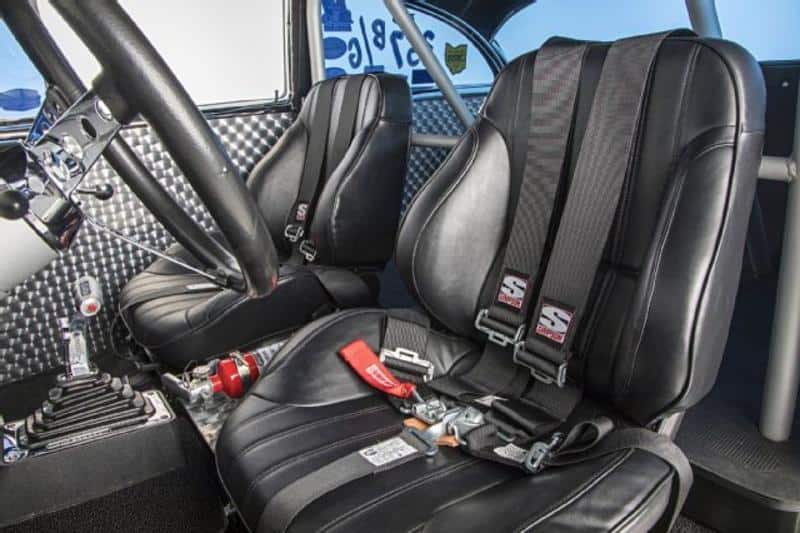 With the powertrain sorted out, work turned to the inside of the car, where ProCar by Scat bucket seats and associated brackets were installed atop an Auto Custom Carpets floor covering. An ididit steering column, Danchuk stock speedometer, Tom Sondles-modified tachometer, and Southern Performance 3-gauge pod complete the area in front of the driver A Hurst shifter sits just off to the side of the driver, and a four-point rollbar is in place for safety purposes.

An updated harness kit from American Autowire ensures the electricity gets to the correct components at the correct time. Woody’s employee Matt Baldwin tuned up the headliner for a perfect appearance, while Auto City Classics supplied fresh glass, which received a gasser-style blue tint. Finally, the Woody’s team engineered interior aluminum panels and a rear-seat delete kit to finish off the inside of the car.

The external treatment of The All American is what truly sets it apart from the crowd. Sondles and the Woody’s Hot Rodz gang took inspiration from that model car and developed an appearance to rival any period-correct gasser. Billy Wooten, Chris Baldwin, and Brian Graber collaborated on the arrow-straight body panels. Graber laid down the Axalta waterborne basecoat of pigment before finishing the car off with a Spies Hecker clearcoat on top.

Wooten and Sondles himself took on the task of wet-sanding and buffing the car’s flanks to perfection, before Taz from The Sketch Pad finished off the car’s appearance with just the right amount of striping. Of course, any brand-new car—which The All American essentially is—should have all-new trimwork outside and Danchuk stepped up to provide the proper pieces. Coker Tires and Keystones by Cragar wheels in 15×4.5 and 15×10 fitments complete the car’s exceptional appearance.

If you’re a Tri-Five fanatic, this car’s for you. All it takes for you to own it is that simple entry into the Tri-Five Nationals—and a little bit of luck. Are you feeling lucky?