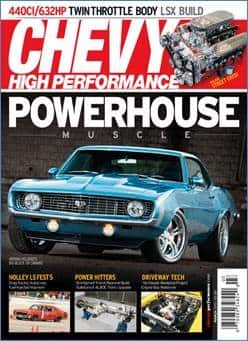 The big boss needs a new transmission for his ’61 Bel Air, and his underlings (us) must deliver. And by big, we mean really big. TEN’s Executive Vice President of Aftermarket Automotive, Doug Evans, is so high us the masthead that he’s technically our boss’ boss’ boss. He also stands about seven feet tall, so he can squash most mortals like a bug with both hands tied behind his back. In all seriousness, Doug is a super nice guy who treats his physically inferior subordinates with the utmost respect, but no one wants to disappoint the big man on campus. Making the task even more challenging is the fact that his Bel Air packs a 565-horsepower Shafiroff Gen I big-block stroked to 509 cubic inches. Saving the big man a few bucks at the gas pump would probably score us some brownie points, too. As such, the quest for a bulletproof overdrive trans led us straight to a Gearstar 4L80E. Granted, taglines are a dime a dozen, but Gearstar’s “Trusted by the Best” slogan resonates loudly through the halls of our offices. Hot Rod has used them in several of its infamous Roadkill project cars, describing them as the best automatic transmissions they have ever used. That’s awfully high praise in anyone’s book, and it all starts Gearstar’s comprehensive approach the trans design, assembly, testing, and customer support. “On average, each of our transmission builders has over 20 years of experience. When an order comes in, one technician builds that transmission from start to finish, and no one else touches it,” explains Gearstar President Zack Farah. “The transmission builder’s initials are inscribed into the case along with a tag number. After assembly, we put the equivalent of 100 miles on each transmission to check for leaks and to ensure the transmission is functioning properly. That way, we’re using the dyno as a testbed, not the customer’s car. If a customer has any questions at any point during or after the installation process, he can call us back and talk to the same technician that built the transmission.” This same no-nonsense approach applies to the design process of each transmission as well. Gearstar doesn’t subscribe to the one-size-fits-all approach, instead tailoring each of its transmission to its intended vehicle application. “Our transmissions are custom manufactured to the specs of each individual car. We take into consideration the intended use of the vehicle, torque output, rear gear ratio, tire height, shift rpm, and vehicle weight,” Zack explains. Considering the Bel Air’s hefty weight and big-time torque output of over 600 lb-ft, Gearstar spec’d out one of its 4L80E Level 4 transmissions for it. The comprehensive package includes a custom billet 10-inch torque converter, trans cooler, and an HGM Compushift trans controller. Think of it as a complete, turnkey transmission package for dummies. All you have to do is bolt it in and hit the gas. Obviously, it takes quite a bit of work to fortify a 4L80E to survive 600 lb-ft of torque, so here’s a closer look at the Gearstar overdrive unit. 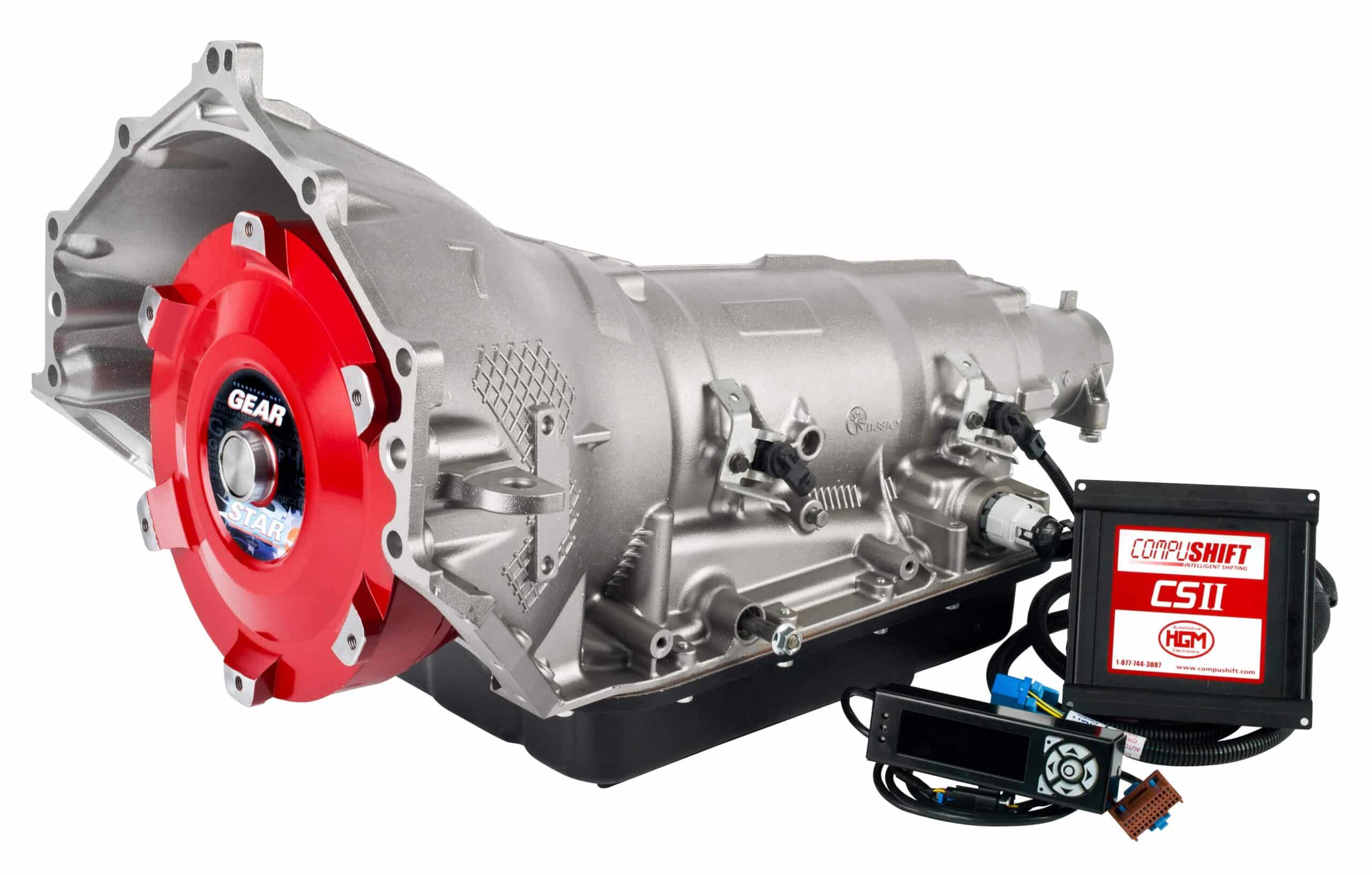 02| The heavy-duty direct clutch drum (left, top) is much beefier than the standard stock unit (right, top). The intermediate sprag is responsible for bringing the heavy direct-drum hub to a stop on the 1-2 shift, and GM has revised it several times through the decades. Gearstar uses the ultra-durable 34-element sprag (left, middle) which is far stronger than the roller-clutch-style sprag (right, middle). It rides on a hardened race. 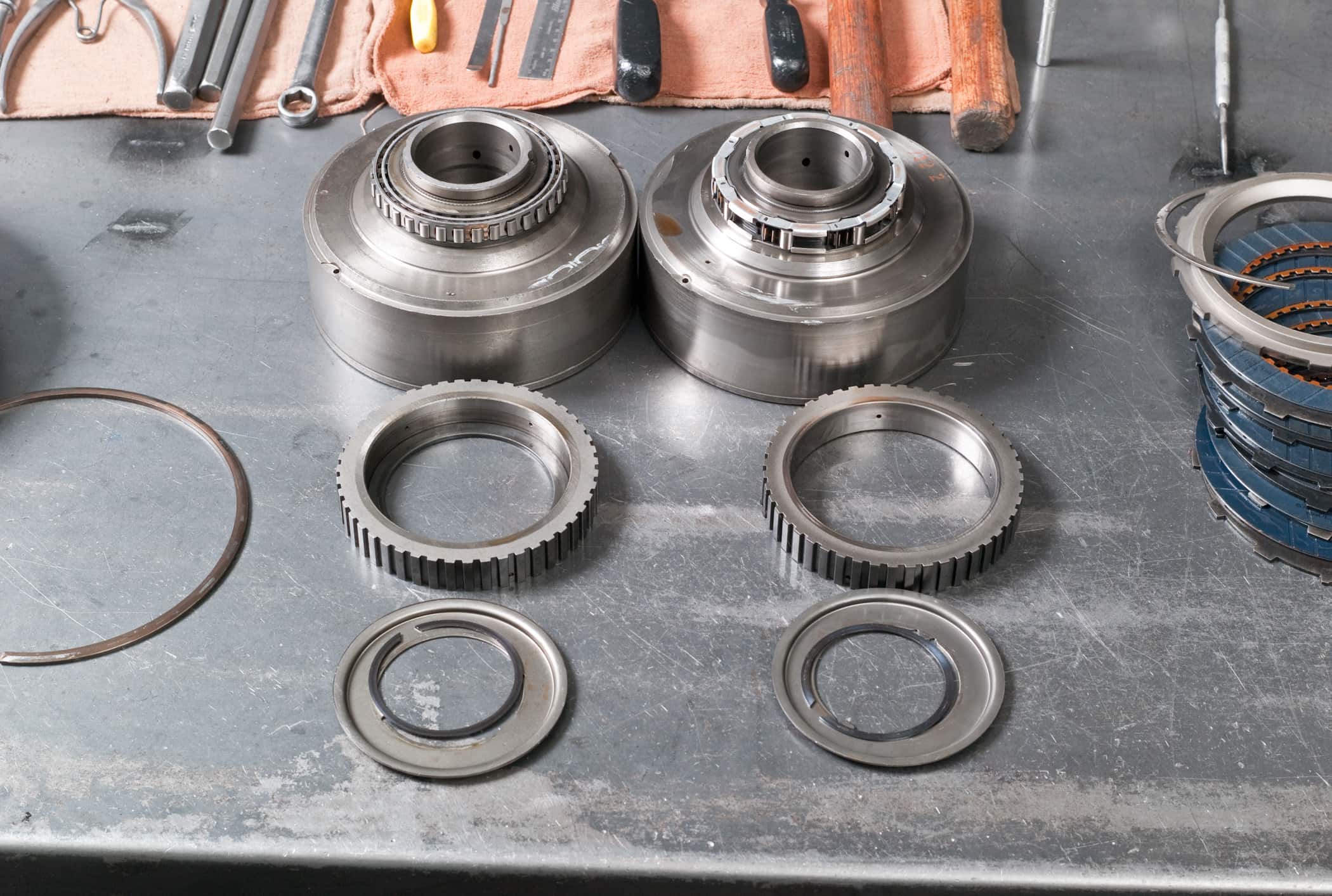 03| When a transmission begins to slip, the clutch packs are usually the culprit. Gearstar utilized Raybestos clutches matched with hardened Kolene steels that not only provide additional torque capacity but also improve shift feel and reduce contamination due to debris. 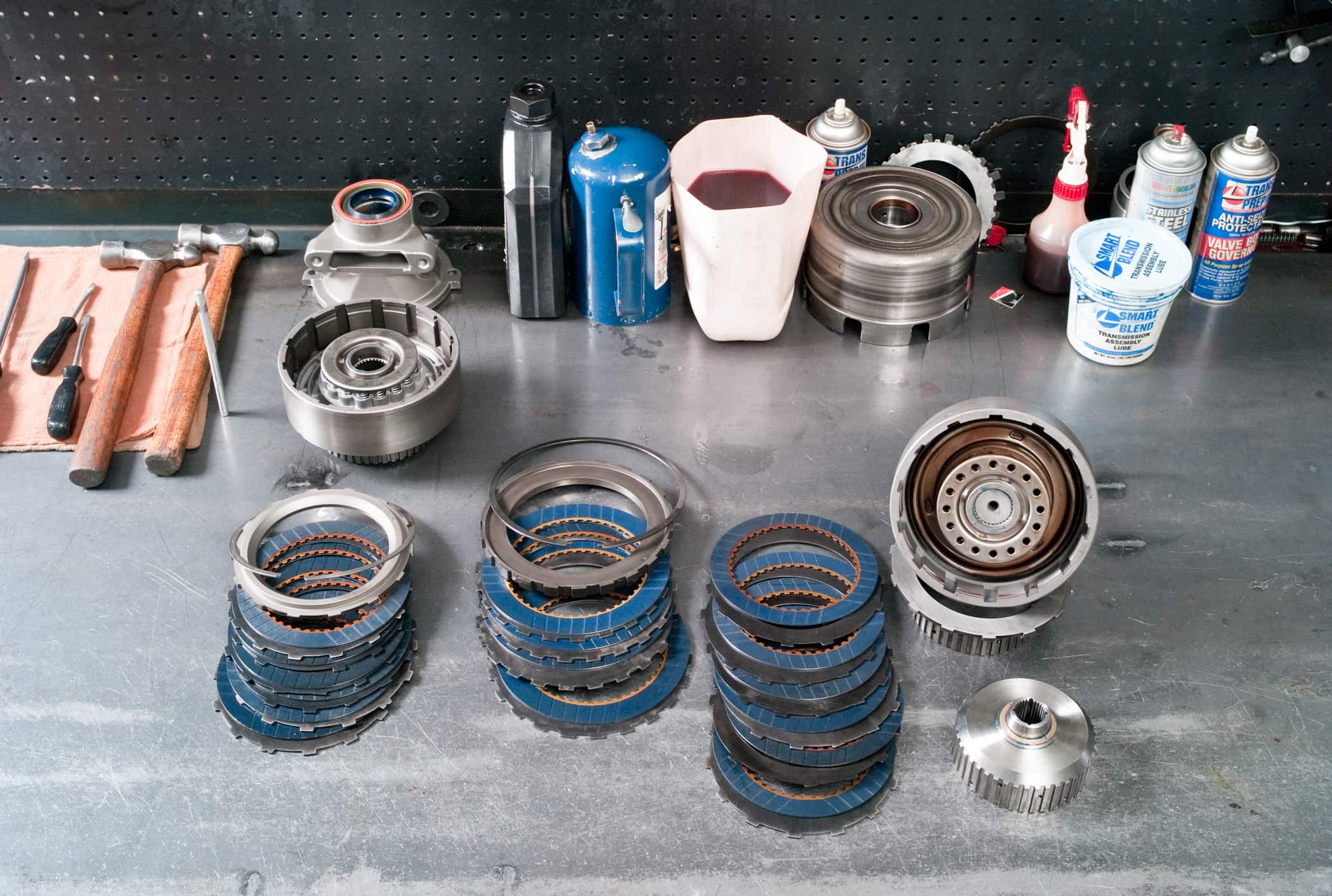 04| While stock clutches are usually smooth, the grooves cut into the Raybestos units help displace fluid when the clutches apply. This promotes firm engagement and dissipates heat. 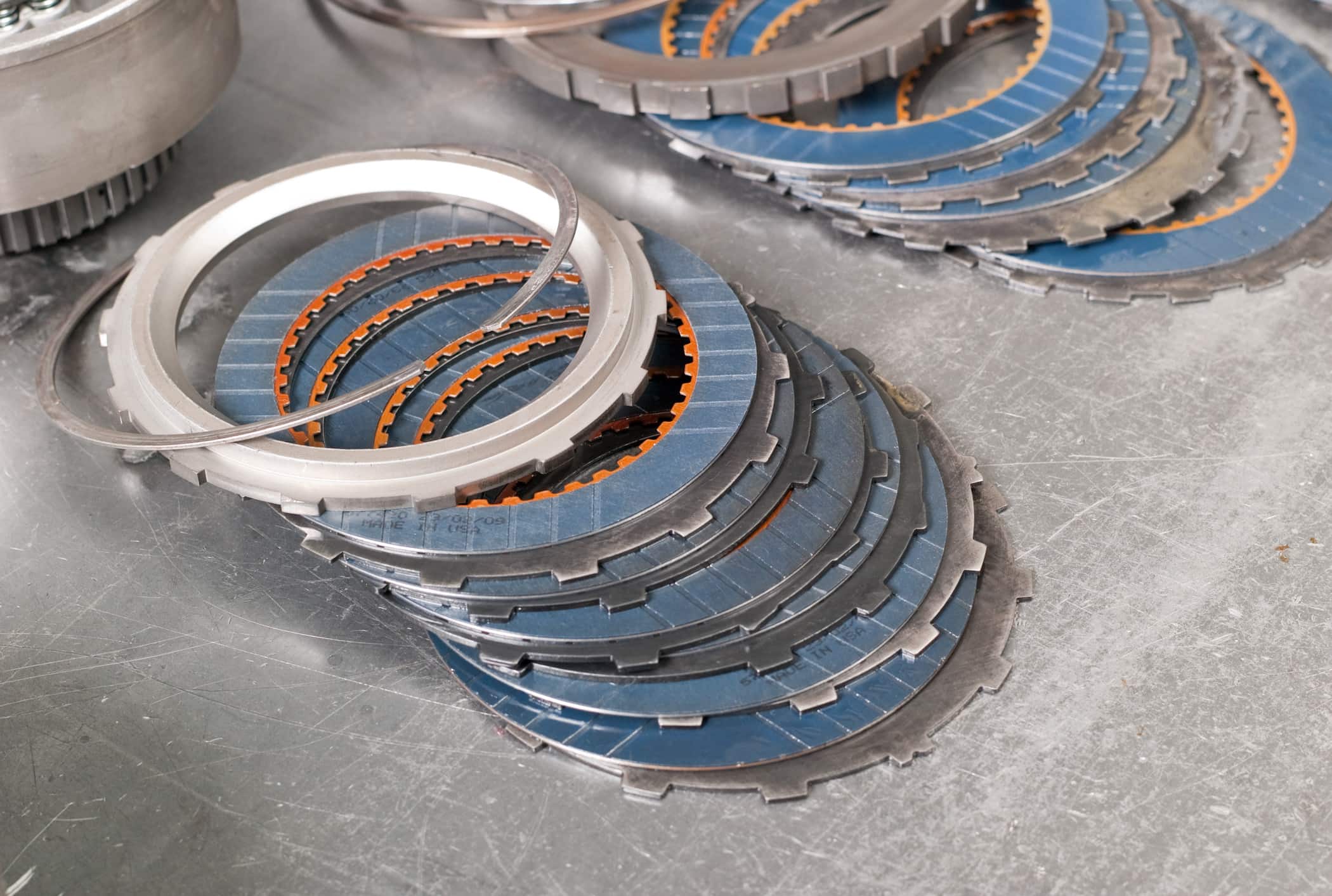 05| Another advantage of the heavy-duty direct clutch drum is that it offers additional capacity for the clutch packs. As such, Gearstar is able to fit six clutch packs inside the drum. The extra clutch packs increase the surface area of the clutch material, thereby vastly reducing the potential for slippage. 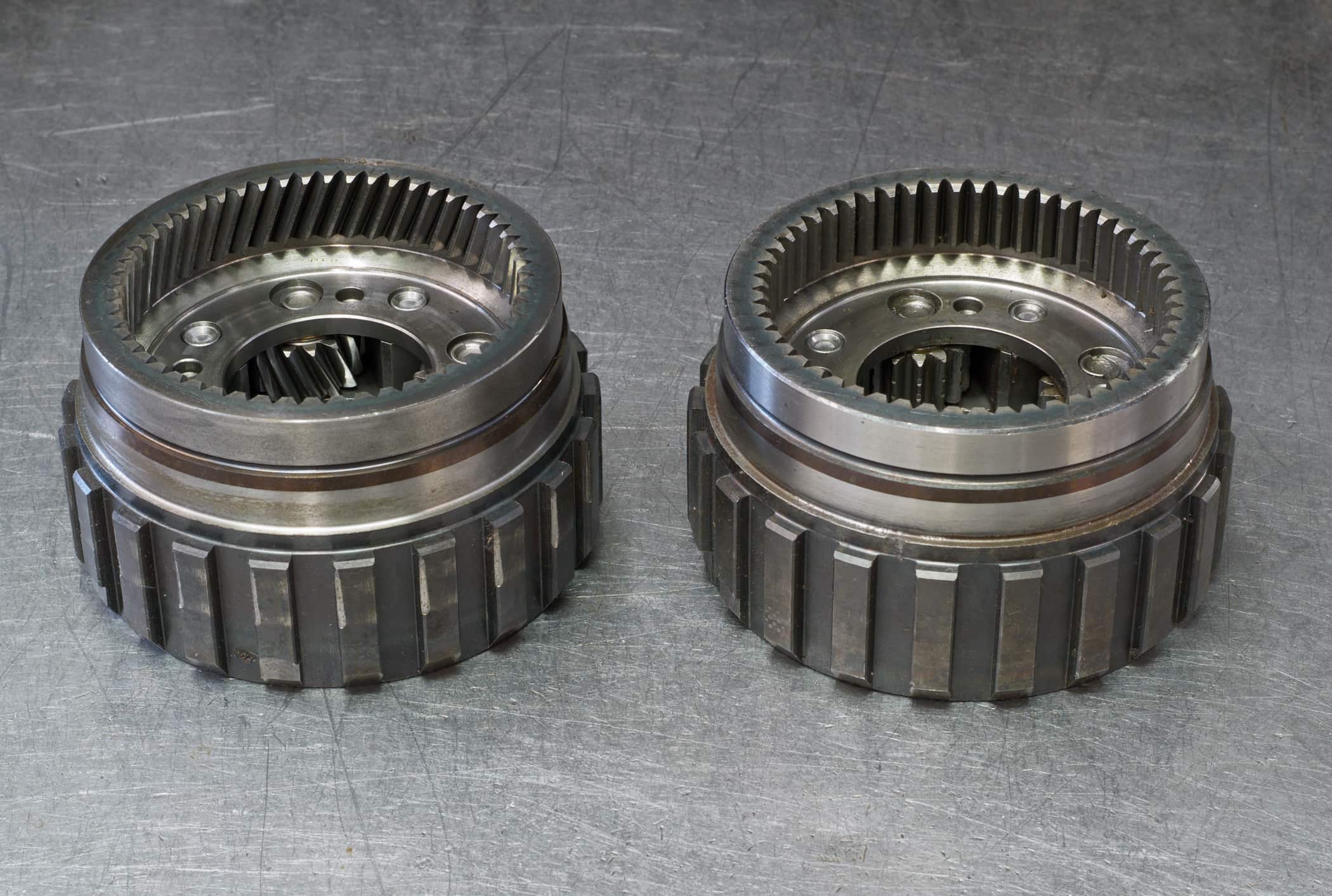 06| Gearstar replaces the factory planetary set (left) with a heavy-duty unit (right). It features straight-cut gears, which offer increased torque capacity over helical-cut gears. Although the aftermarket offers planetaries with a variety of different gear options, the stock ratios are perfectly suited for our ’61 Bel Air.

07| Granted, the stock cast-iron forward clutch hub (right) is a plenty strong for many street machines, but the 300M billet steel hub (left) used in the Gearstar 4L80E is far better suited for high-load applications. The billet hub virtually eliminates the potential for spine failure. 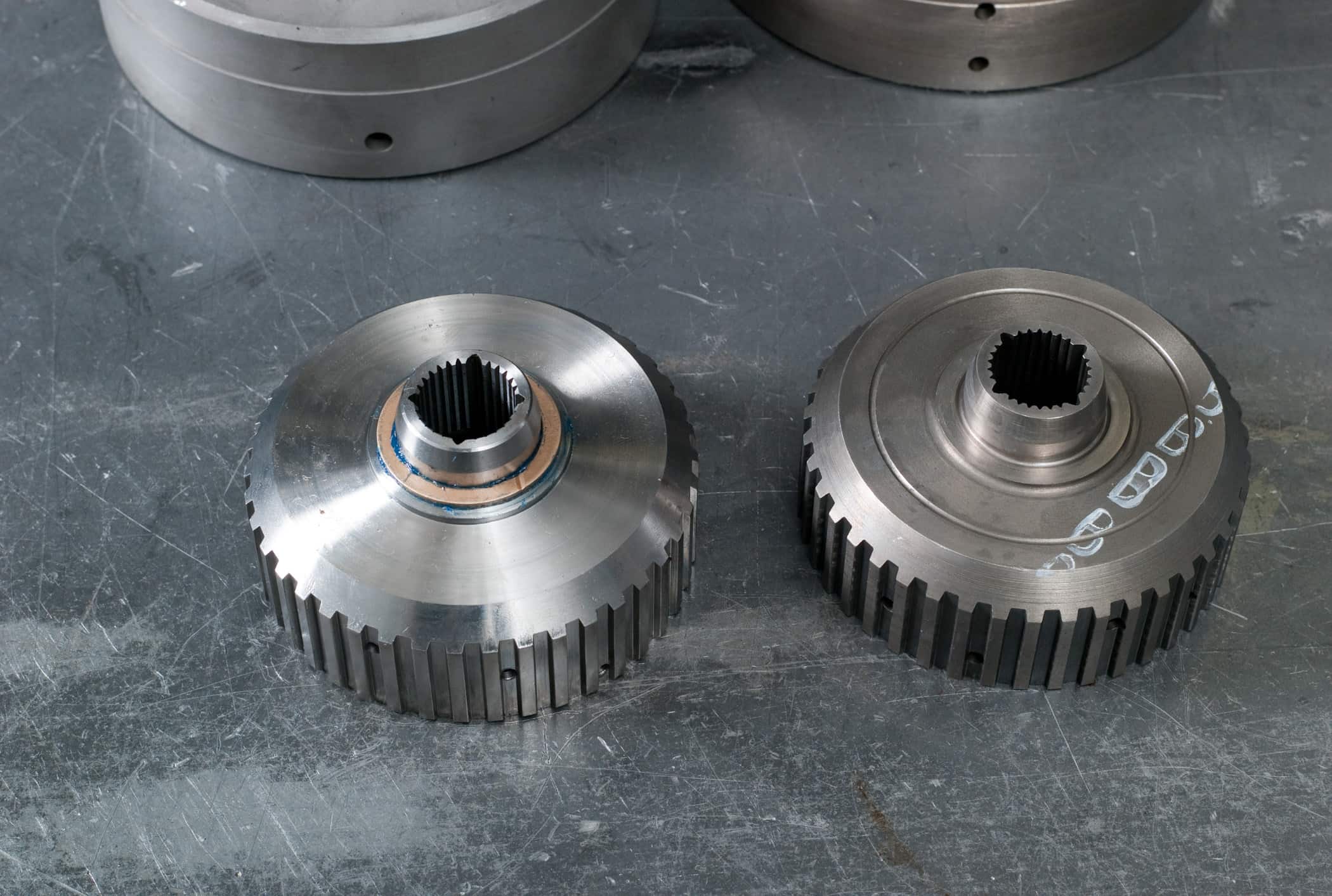 08| The 300M billet input shaft (right) is larger in the drum area and features longer splines than the stock input shaft (left). Metallurgy wise, 300M is essentially 4340 steel with higher silicon, carbon, molybdenum, and vanadium content. The result is a much more durable shaft that’s vital when torque output is north of 600 lb-ft. 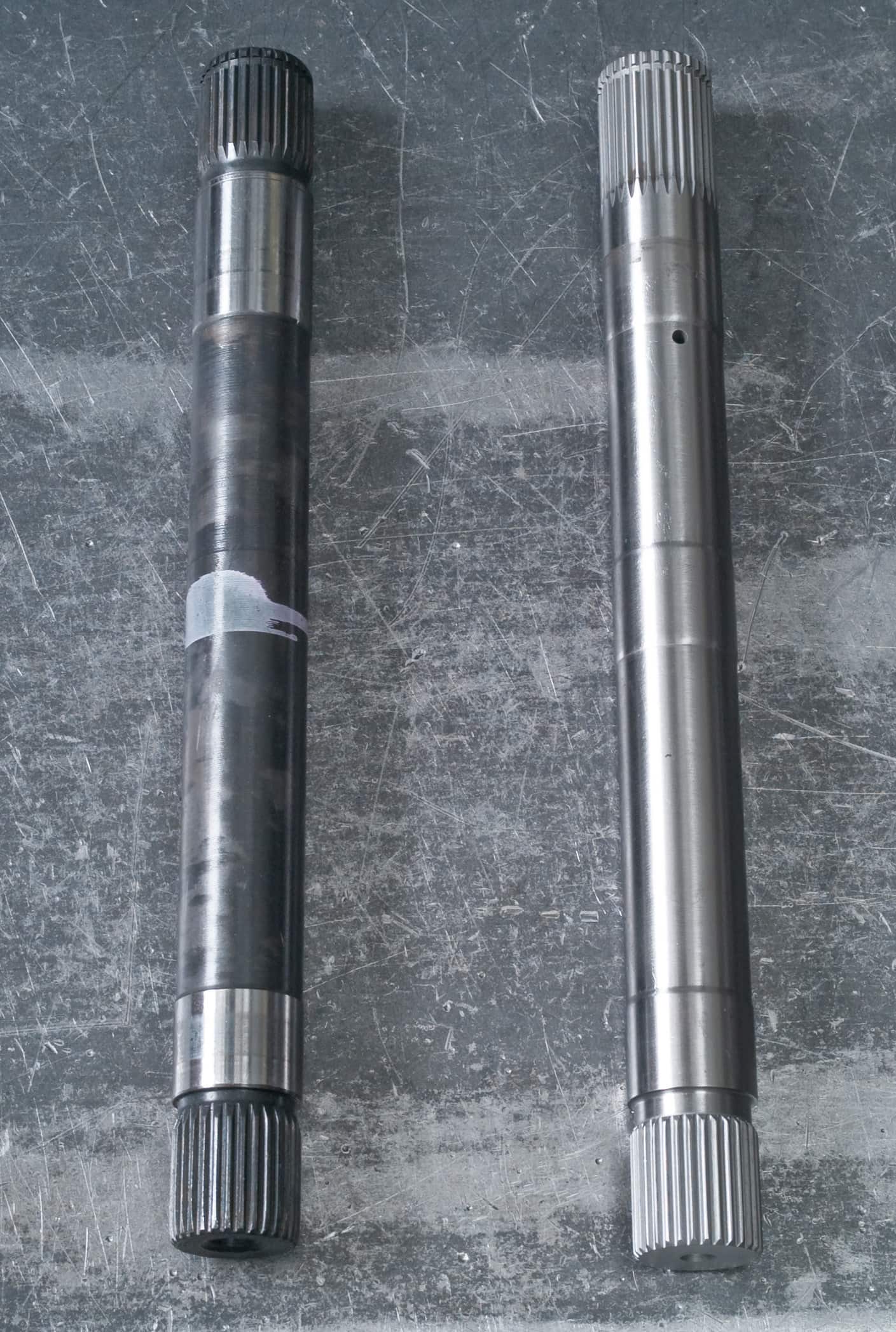 09| Opting for a roller bearing on the forward hub (right) instead of a thrust washer (left) increases load capacity by quite a bit. Likewise, the bearings also reduce parasitic drag and power loss, which means that more horsepower finds its way to the rear tires. 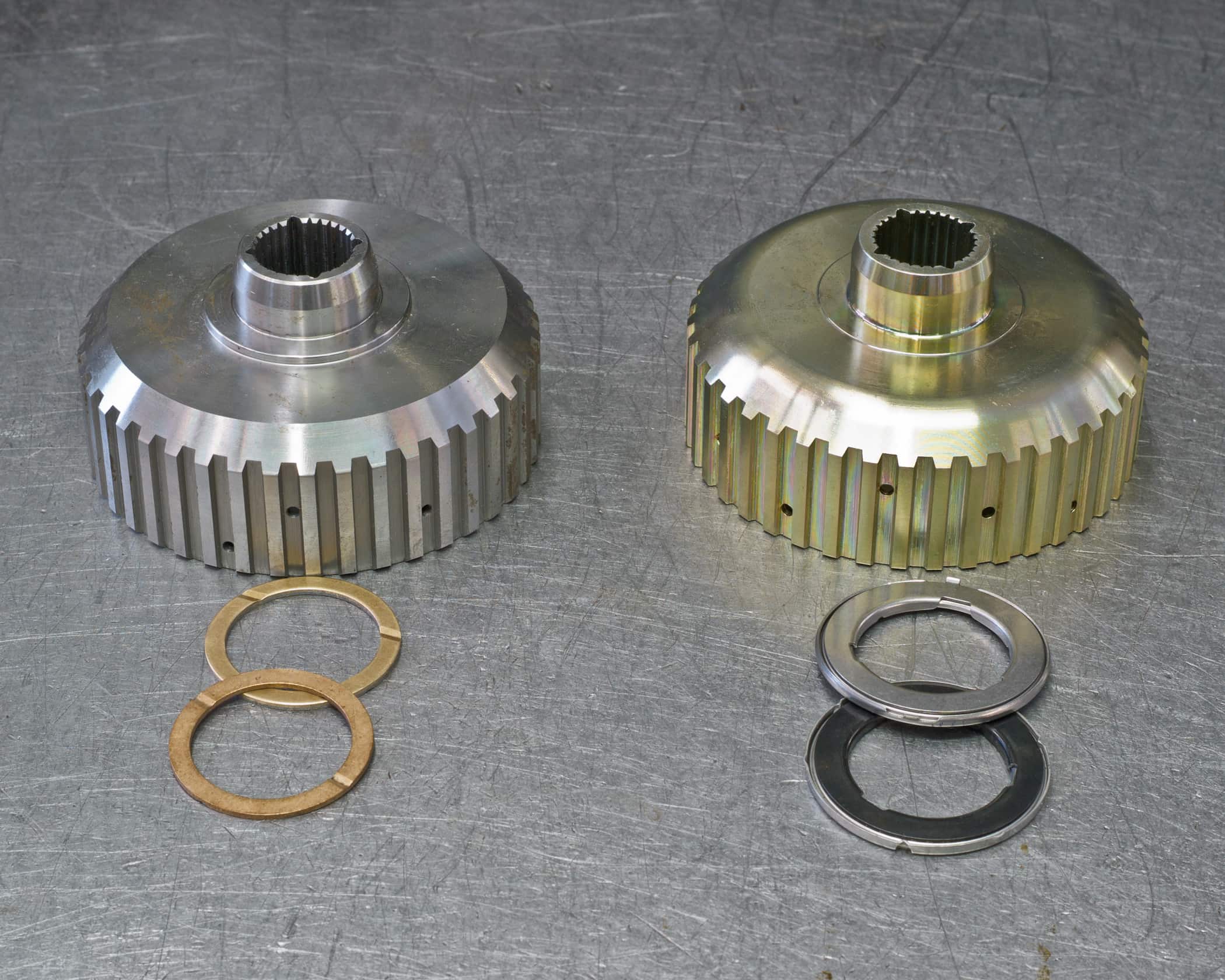 10| Since the low-Reverse band holds the heavy reaction carrier in manual-Low and Reverse, it’s subjected to tremendous stress under heavy throttle. Increased line pressure also places additional stress on the band as it engages. In comparison to the stock band (left), the heavy-duty band used in the Gearstar 4L80E has wider contact points for the lugs and carbon-blended lining. 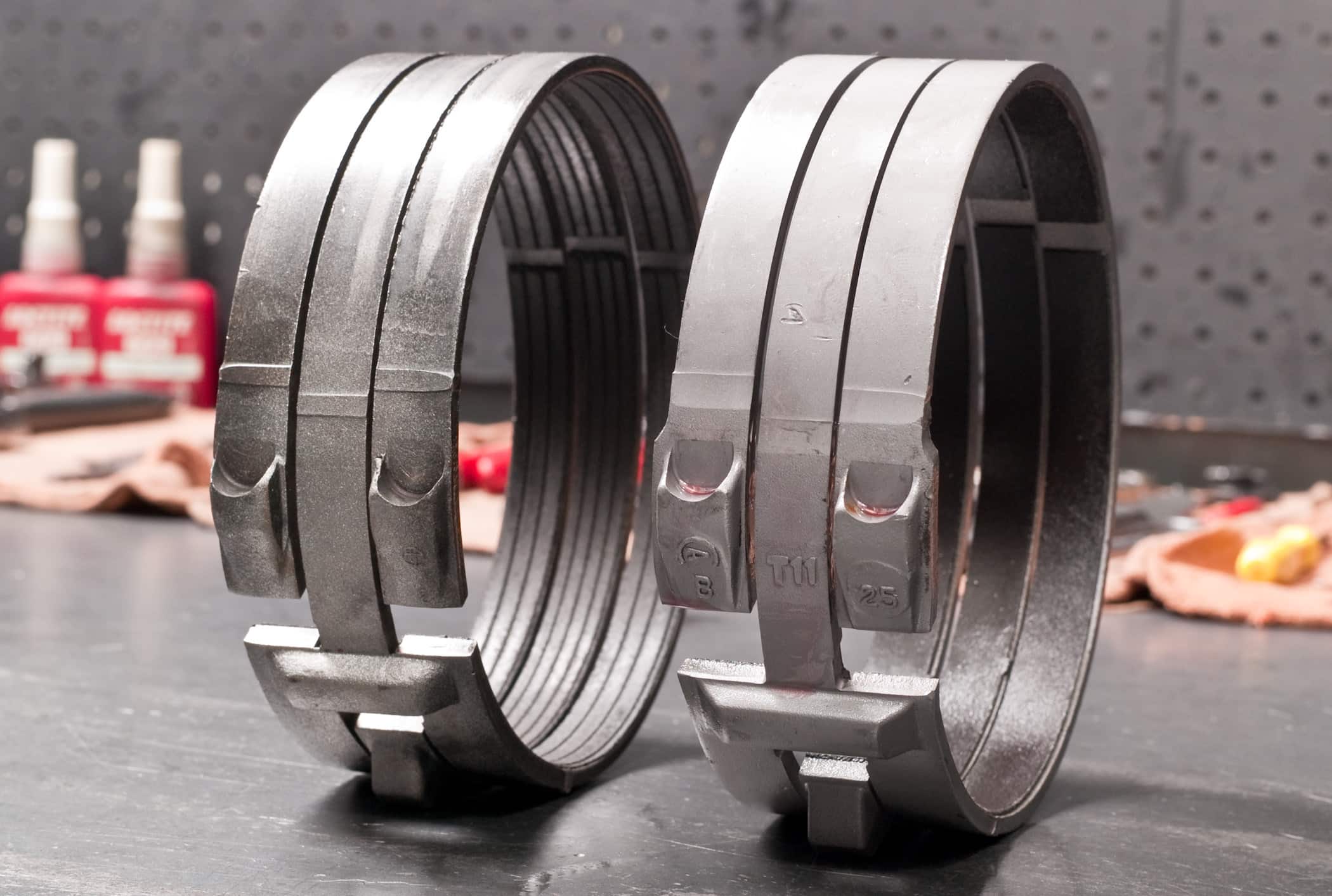 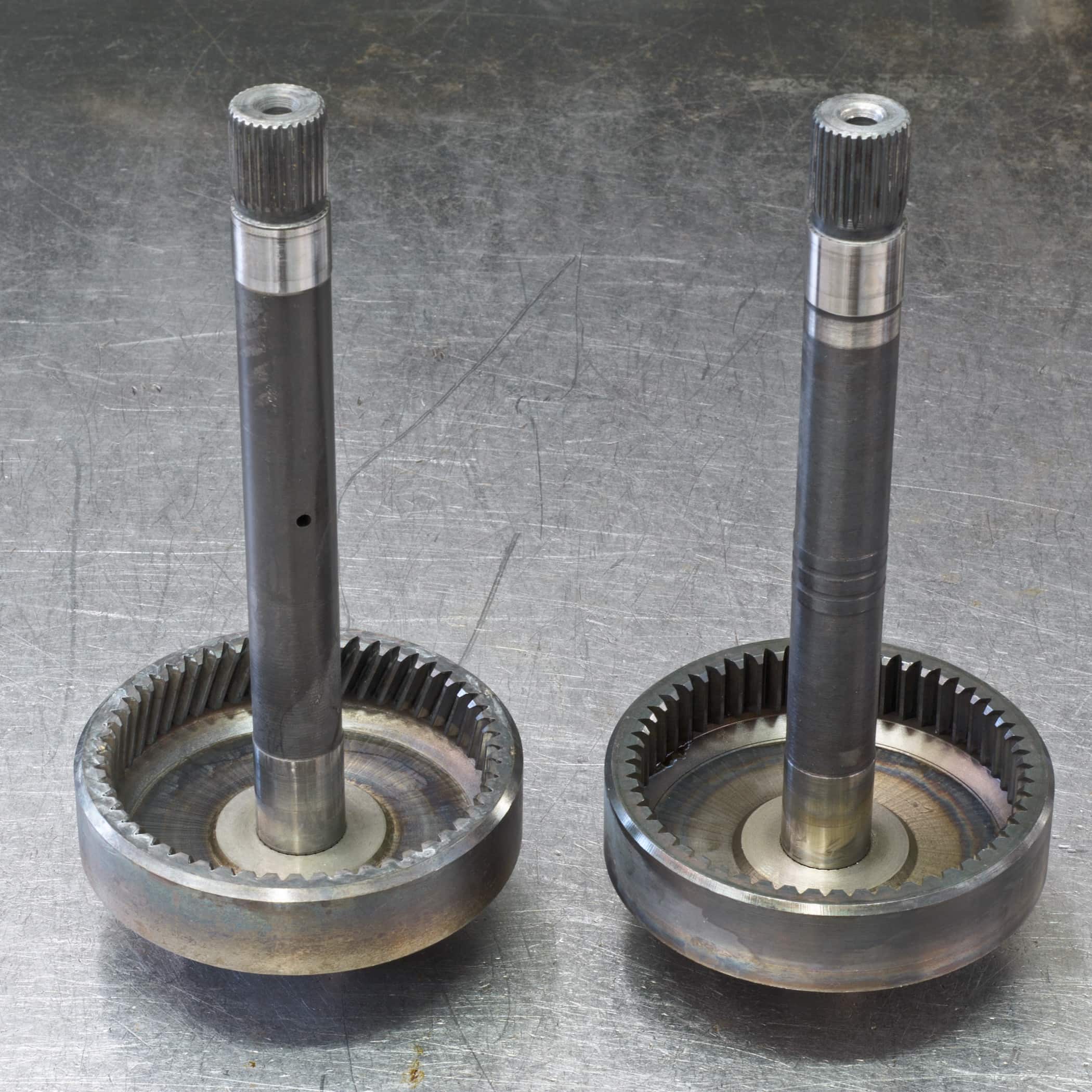 12| Having the right torque converter can make or break the acceleration and cruise characteristics of a car. All Gearstar transmissions include a torque converter custom-matched to each application. Our 4L80E was pair up with a 10-inch billet converter with a projected stall speed of 2,600 to 3,000 rpm. 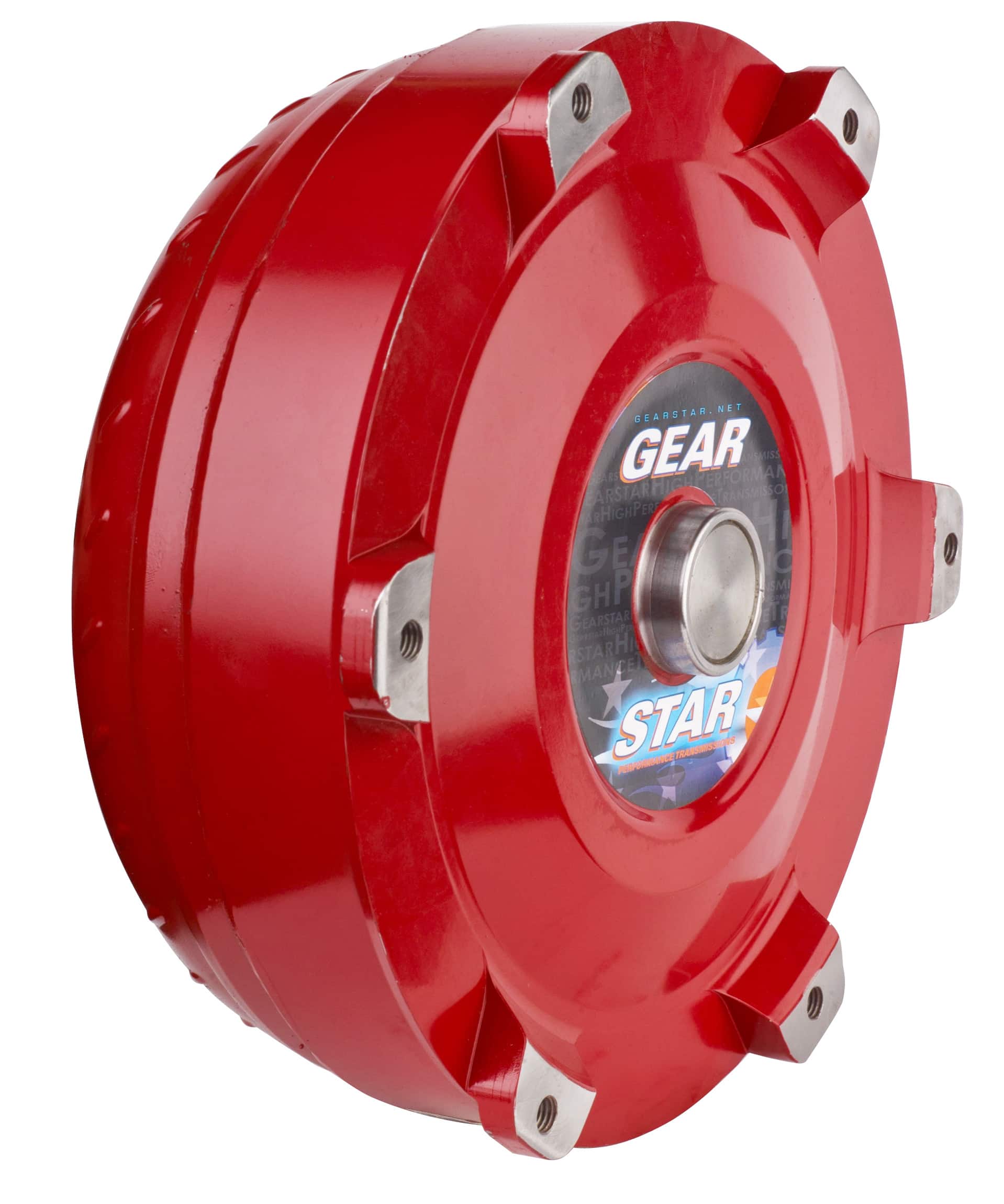 13| Heat is the number one cause of transmission failure, but most aftermarket transmissions place the burden of finding an appropriately sized transmission cooler on the customer. In contrast, Gearstar offers, at an additional cost, a 30,000 GVW cooler and fan that matches up perfectly with its 4L80E Level 4 transmission.

14| Since the 4L80E is an electronic transmission, it requires an ECU that has trans control capabilities or a separate transmission computer such as the HGM Compushift CS2. In addition to setting shift points and shift timing, the Compushift unit also controls torque converter lockup and interfaces with both a throttle-position sensor and MAP sensor. It can interface with paddle shifters as well. The unit includes a cockpit-mounted control unit that enables programming without a laptop. Alternately, Gearstar can set up a 4L80E with a manual valvebody to eliminate the need for a separate trans controller altogether.

15| During the dyno testing process, Gearstar simulates speeds up to 130 mph to check for leaks, noise, vibrations, shift timing, shift quality, and proper overall operation. After it’s finished, the transmission has been validated with the equivalent of 100 road miles. Although parts defects are uncommon, in the rare event that a component is deemed faulty, Gearstar can correct any and all issues before shipping the transmission to the customer. Gearstar utilizes both a Hicklin Axiline dyno as well as a WinDyn 97000 series unit. 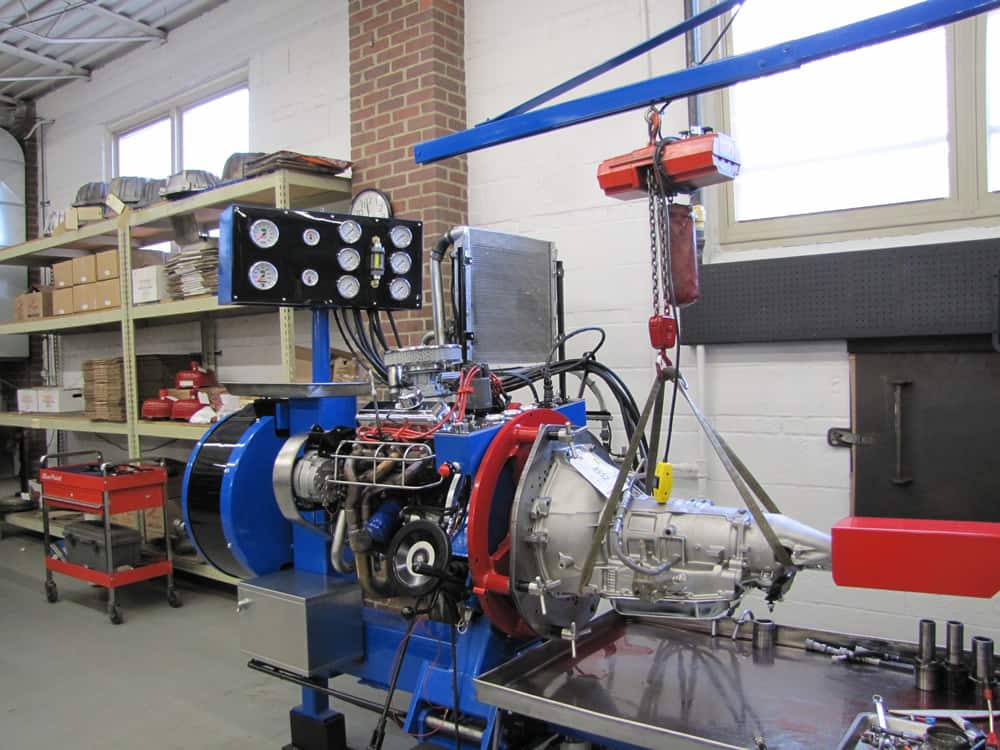